A Mama With Power Tools: How I Made a Bean Bag Toss Game

PZ’s playgroup had its last birthday (at least for a couple of months) this week. A little guy, O, turned three. He and his family are fairly active so I wanted to do something fun that wouldn’t be TOO easy, but would be engaging for more than just this summer. I was really intrigued by Future Craft Collective’s bean bag toss that I blogged about in my Get Outta Here and Go Outside post. So I took their tutorial and tweaked it a little. Instead of using a cardboard box, I broke out the power tools and made a corn hole board out of plywood. This was my first time using a jig saw and it was awesome! Totally empowering! Mamas, if you are looking for something fun to do on Mother’s Day, this just might be it. Ha!

Continuing on the I’ve never done it before theme, I thought I might as well do a little tutorial as well. I, of course, didn’t think to do that until I’d already done all the cutting, but I’ve got a lot of pictures so hopefully I can walk you through the rest of it. If you have any questions, just ask!

rice or beans (some sort of filler for the bean bags)

It took me about 4 hours, which I split into 3 days. My friend Yancey came over to help me figure out how to use the jig saw. Thanks, Yancey! You rock!! 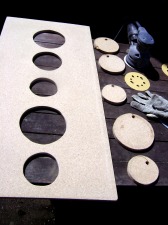 First thing I did was take a compass and draw circles onto the plywood where I wanted the holes to be. I made mine different sizes to vary the difficulty when playing the bean bag toss game. Once I was satisfied with the size and placement of the circles, I took a drill and poked a small hole near the edge of each of the circles. This gave me a place to put the jig saw blade when it was time to cut the circles out. I simply put the blade into the small hole I’d made and then followed the circle I’d drawn (it was kind of like sewing!) until I’d made it all the way around and the circles fell out. (I kept them so you could see the drilled hole on each one and also because I’ll probably try to use them in some future project.)

After I’d cut the holes, we packed it up for the night and had a yummy bbq, but if you’re more interested in continuing the project the next step is sanding. I took my random orbit sander (it almost sounds like I know something about power tools, right!?!) and sanded both sides of the board down and used some mid-weight sand paper to sand the edges of each hole. It was a pretty easy sanding project. If you’ve ever done any sanding down of walls before painting (which is what I’ve mostly done), this was a breeze! 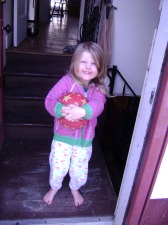 The next thing you do is set up for painting a base coat. This is PZ standing in the doorway “helping” from afar. She has a tendency to like to touch wet paint, so this was best for us. But if your kiddos are older or you’re just in the mood for some messy fun, they could definitely help with this part.

I painted my board white with some house paint we had stashed in the basement. Any acrylic paint will do. Out in the sun, this took maybe 45 minutes to dry. It isn’t completely necessary, but I painted both sides of the board. This would also be a good time to paint the leg if you want to do that. (I didn’t, but kind of wish now that I had.) 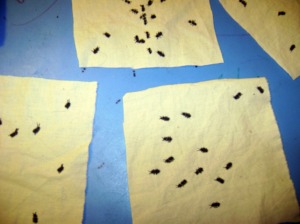 While I waited for the paint to dry I went inside for some sewing. I stayed fairly true to Future Craft Collective’s tutorial here. I did use 5X5 squares instead of the 6×6 that she had suggested, simply because I wanted to make sure that a 3 year old would be able to get the bag through even the smallest hole on my board. After playing with it, I think 6×6 would have worked fine, too. I went with an Ant theme because of the picnic plaid fabric I had, plus I figured boys like bugs. They do, right? I had some old muslin strips in my scraps box so I cut those out and then used a fine tip black Sharpie pen to draw little ants onto the muslin. It came out pretty cute! 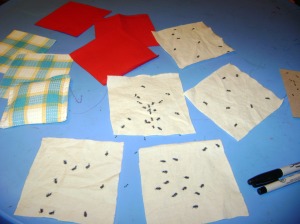 I cut out 6 muslin squares, 3 picnic plaid twill squares, and 3 red canvas squares so there are 3 bean bags for 2 competitors. The plaid is one of my thrift store fabric finds and the canvas was some fabric my mom-in-law gave me several years back.

After I was done drawing my ants, I put the muslin and plaid fabrics wrong sides together, top stitched around all 4 edges, leaving a 2 inch hole in one side. I used a 1/4 seam allowance. Then I turned the fabric right side out by pulling it through the hole, pressed the bag, filled it about 2/3 of the way full with brown rice (I used a funnel) and sewed it shut by top stitching around all 4 edges again. (I know, I know, you’d like some pictures. Check out the Future Craft Collective’s tute for those)

By this time the paint was dried so I went back outside and attached the hinge picture frame style to the back of the board. Make sure your screws aren’t too long or they’ll punch through to the front of your board and you don’t want that! 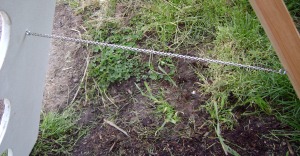 We then attached a small chain from about halfway down the back of the board to the leg in order to keep the board from falling over. This was a little more wobbly than I would have liked. I think having a wider leg and centering the hinge near the top of the board would work better, but this was the leg we had, so we made it work.

Then back inside to do some detail painting. I stayed with the Ant theme (super easy to paint!), but you could really do anything here. The more creative the better. I added numbers giving each hole a score value and that was it. The girls and I took the game over to O’s house this morning because unfortunately the actual party (at the firehouse museum!) was during the girls’ naptime, but not before PZ and I played several rounds. Looks like I’m going to need to make another one for our house. Guess I’ll just have to break out the power tools again. Ha!

4 responses to “A Mama With Power Tools: How I Made a Bean Bag Toss Game”