I’d seen Circus on Netflix a few months ago with Hubs, so I knew if we were going to New York  I wanted to take the girls to the see the Big Apple Circus. Man. It was FAN-FREAKING-TASTIC! 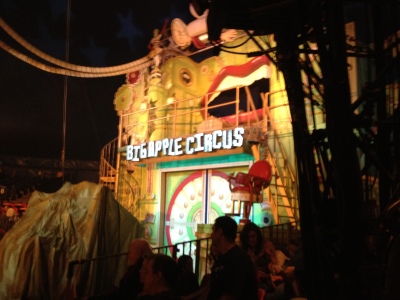 We had second row seats! 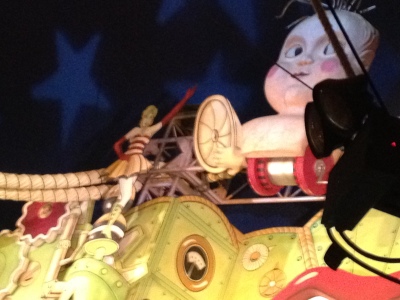 You could glimpse this baby head from behind the tent flap as you waited to enter.

We saw them on their last night at Lincoln Center for their 34th season and I was so impressed. It was really magical and hilarious and exciting and inspiring. Everything you could ask for and more! This season the show was all about using your imagination and reaching for your dreams. The acts were supposed to be people’s dreams come to life.

The top of the tent is covered in these beautiful stars. 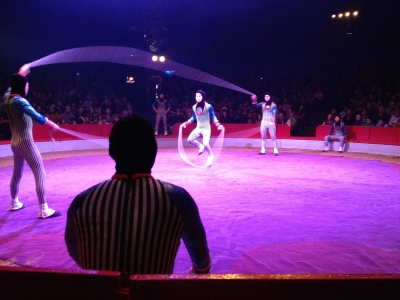 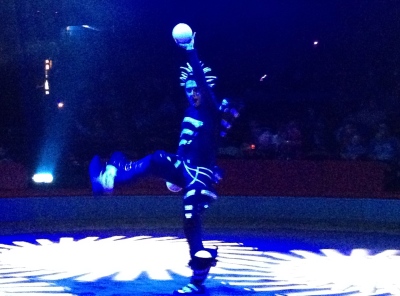 The animal portions of the show were some of my favorite. Although my pictures are poor, having such cute puppies, and gorgeous horses so close you could almost touch them was such an amazing experience. Meanwhile, Jenna Robinson is singing in this phenomenal operatic voice as she’s flying overhead and strapped into some sort of horse shaped contraption. It was very strange, totally beautiful, and completely otherworldly. Q, whose jaw practically came unhinged during the act, said Jenna had the prettiest voice she’d ever heard. I couldn’t even take offense it was so wonderful. 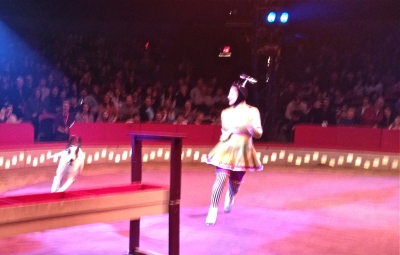 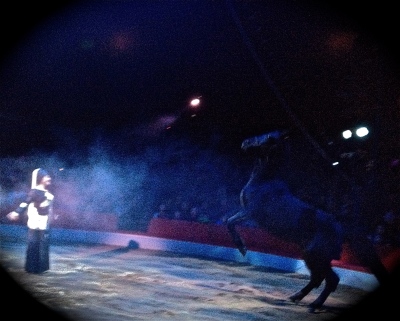 Jenny Vidbel's horses were so close you could feel the wind as they galloped past.

Another one of Q’s favorites was Melanie Chy’s hand balancing act. The whole time the woman was preforming, Q was saying “Wow”, over and over. It was pretty cute. And she was right. The act was Wow! 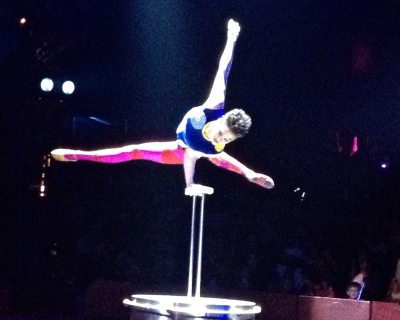 Melanie Chy bent our brains with her incredible performance. 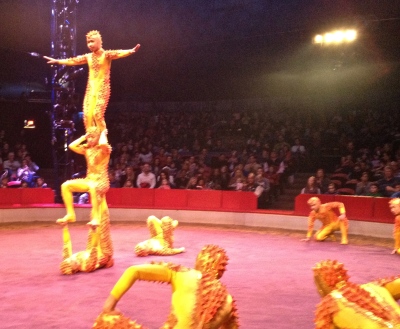 The Shandong Acrobatic Troupe came out for a pyramid act.

PZ’s favorite, and one of mine, was the final act of the show. The Flying Cortes‘ trapeze act was tremendous and right above our heads! The topper was when 10 year old Ysabella dropped the charade of being a shy audience member and climbed to the top of the trapeze platform some 20 or so feet above our heads. PZ’s couldn’t believe it and kept asking me how that little girl could be doing something so cool. 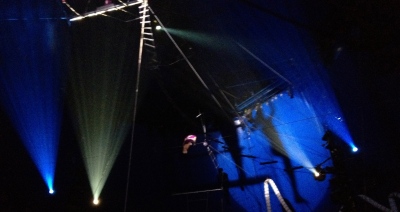 Just the shadow of a Flying Cortes 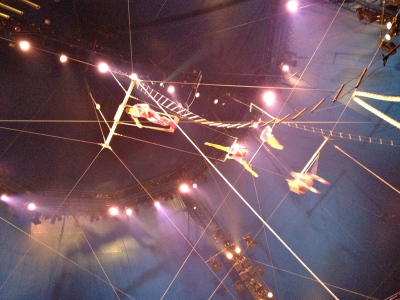 Although not pictured, Barry Lubin as Grandma and Scott and Muriel were hilarious. They had us all laughing hysterically throughout the show.  I am so glad we got to go, especially on this final tour for Grandma. It was excellent, riveting, and totally entertaining. You definitely gave us something to DREAM BIG about. Thanks Big Apple Circus!

If they come to your town, GO!

These are two VERY cool ideas. If I can get my stuff together I’m totally going to attempt both of them. When I do the merit badges, I’m thinking I might incorporate  a summer journal idea I’ve been batting around.

The Mom Bucks idea is brilliant! I like the commenter’s suggestion to put the kid’s picture on the bill, too. We’ve got a sticker chart going right now, (like our 5th one). It gets enthusiasm up for a day or two and then it is quickly forgotten. I’m hoping the Mom Bucks might solve that issue.

What ideas do you have for getting your kiddos to start taking some initiative in their household responsibilities and for keeping the “I’m bored, Mom” ‘s down to a minimum? Just in case you missed it, check out my popsicle boredom buster idea previously posted here.

As you know, I’ve been trying to come up with some fun ways for the girls and I to enjoy our summer together without going crazy. This is the last week of school for Quinby and I am starting to feel the pressure of providing creative edutainment for my kiddos. Today, we got to try out my latest boredom buster idea – Popsicle Adventures!

I started off by thinking up a bunch of action words like run, jump, dance, and a bunch of object words like ball, rope, dolls. I then took my Sharpie marker and wrote the words onto my popsicle sticks near the end of each stick. This will be the part of the stick that goes inside of the popsicle. 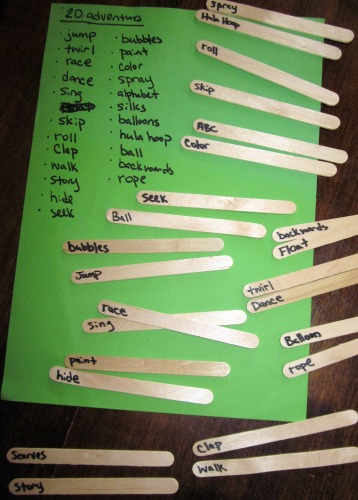 Then the girls and I had a blast on Friday making up three batches of popsicles. We made Blue Annas, Strawberry Limeys, and Triple Berry Blast Offs. I used molds that were made for plastic sticks, but just put tin foil on the tops and carefully pierced the foil with the popsicle sticks, adventure word down. 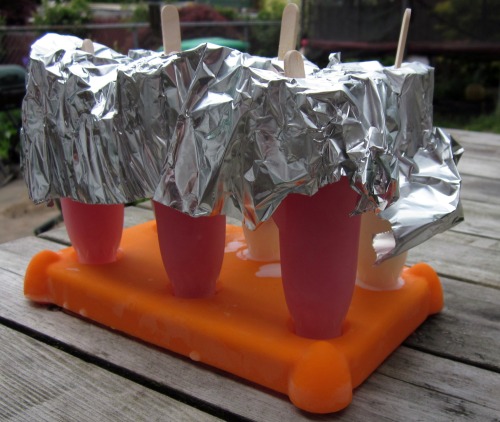 This morning, I took the popsicles out of the freezer, popped each one out of its mold, and wrapped them singly in wax paper before storing them in labeled freezer bags back in the freezer. Once my molds were clean again I made Cherry Lemonade Pops, Choco Pops, and Creamy Dreamy Lemon Pops. 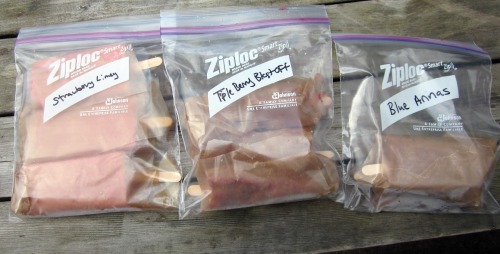 Between all the cooking, (we also made rosemary pizza dough and chocolate chip pumpkin bread), and the trampoline jumping, Pannonica decided she was bored and thus the adventure began! 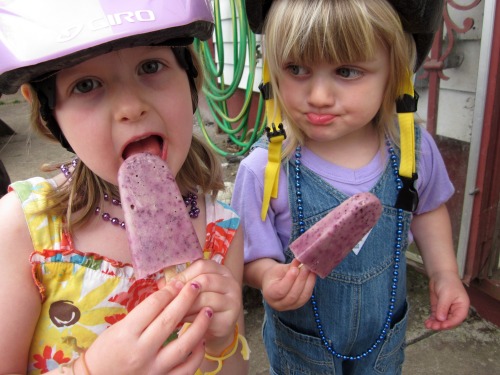 Each girl got her own popsicle. Both chose Blue Annas. Upon completion of the yummy pops, each girl found she had a word. PZ had hula hoop and Quinby had walk. 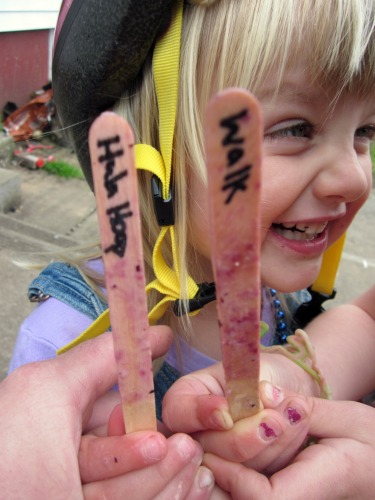 Now we had to figure out a way to put the two words together. First the girls tried hula hooping while they walked. This didn’t work since neither girl can really hula hoop even standing still. 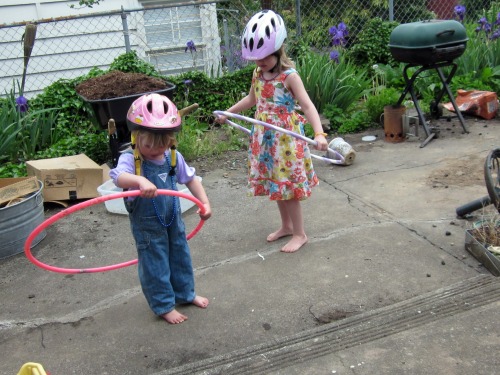 Then it was decided that the hula hoops themselves should walk and so they needed legs. The girls got right to it, folding up paper to make accordion legs, coloring shoes on the ends, and taping them to the hula hoops. 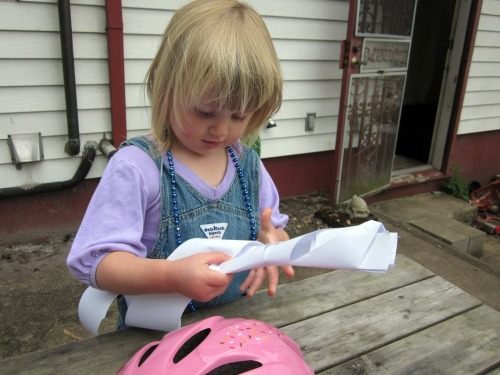 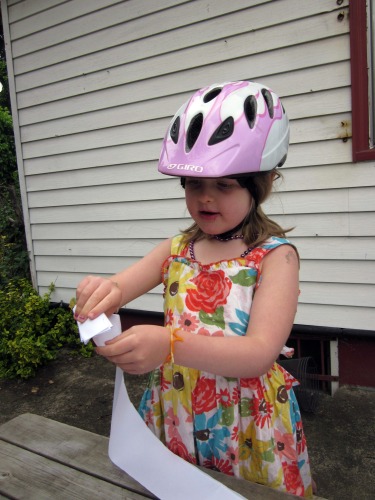 PZ took hers for a walk, while Quinby enjoyed watching her sort of dance in the breeze. 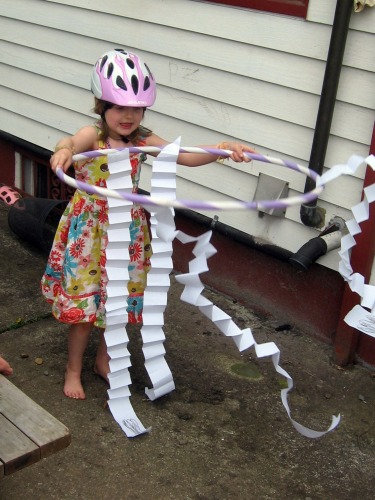 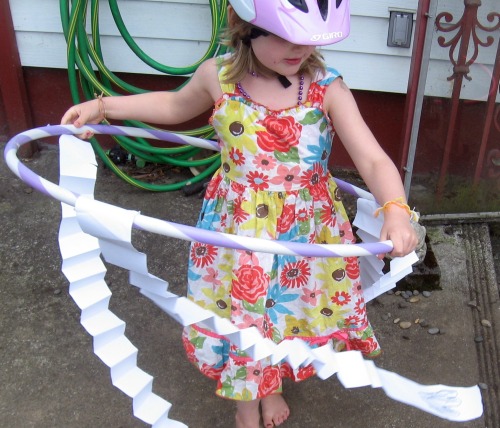 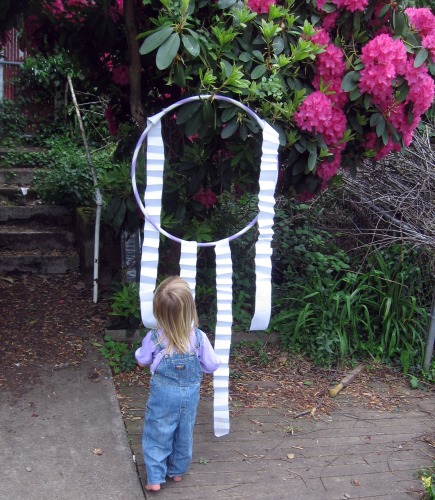 The whole adventure took a little over an hour and everyone had lots of fun. When we were done, both girls wanted to go on another “adventure”, but I had to set the limit of one per day. I have a feeling we’ll be doing this a lot this summer.

Here are the recipes I used to make our popsicles. Let me know if you come up with any good recipes or adventure words. I could use some help brainstorming over here!

Triple Berry Blast Off Pops (we made these in rocket molds)